Population Inside a Area Search Map 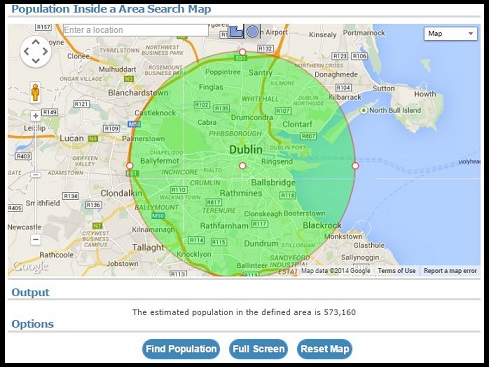 Screenshot of radius population estimate for Dublin, Republic or Ireland

Comments For This Page

I drew a polygon that included an entire US state and a few neighboring cities, but the calculated population was about 1/4th the population of the state. So something is very very wrong with the data.
By Foobar on 23rd January 2022

I can't get this to work. I am trying to use it in the US, with 100 mile radius. When I click 'find population', it either freezes, or gives me an error saying it is usually because the area is too small.
By Paul on 18th January 2022

Apparently all of the south of England, including London, has a population of 4 million
By Michael on 2nd January 2022

Ok, seriously, I have not had any of these problems except the population counter getting stuck on "Please wait..." and getting an error saying the radius is too small.
On 18th December 2021

Populations for Sacramento and Los Angeles are both too small... It said that all of Greater Los Angeles has a population of 717k when in reality it is like 18 million...
On 30th November 2021

pretty inaccurate... zhongshan in guangdong should have over 4 million, i used the polygon for the exact area and it shows a population of 880,000
By alex on 10th November 2021

I have found the map to be very accurate. I would say a lot of the problems is "user error". The interface is not great,don't even try to correct an area,just start again.
On 7th November 2021

Calculations for Bologna and Imola are way off, and for Central Mexico as well
By ChurchDeservesBlasphemy on 25th October 2021

Excellent tool. I repeated an exercise I had done 4 years ago and the numbers were as expected. There was a tool for the US I found but nothing similar for Canada. I had to laboriously aggregate Canadian census districts last time (There's probably some GIS way to do it simpler, but I don't know how) and this way got results. It would be nice if you could get breakdowns by country, but hey, for something that's free I'll take this.
By Kailer on 21st October 2021

I set a circle of radius 6000km, got an error and that usually it was because the radius is too small to process.
On 10th October 2021

what?
By Doktor_Kitten on 4th September 2021

site impossible to figure out
On 28th July 2021

Showing the most recent 20 out of 207 comments. Click to see all the comments.

Add your own comment below and let others know what you think:

Find Place With Your Name

The Find Place With Your Name page has been updated. Better results and improved feedback when there are no results found.