Line of Equidistance Between Two Points

See the path where the distance between two points is the same at all times.

The Line of Equidistance Between could be used to work out a boundary line or confirm which locations are closer to one point or another. 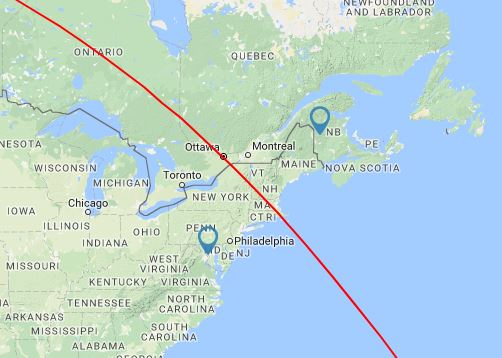 Comments For This Page

If you select somewhere in south america (near the south) and in australia (near the pacific) you'll get a line that cross both points instead of an equidistant one. Doesn't seem to work properly between the two continents
On 15th December 2019

This tool does not provide the same results as Google Map...
On 22nd November 2018

Would be great to have a version of this for driving: What is the midpoint-line between two points on the road? Perhaps let the user be able to set a length for this line (the 500-mile-long mid-point line). Similar to the "How far can I travel" tool.
By Fred on 19th September 2017

Equidistance lines between three points, dividing the map in regions closer to a given point
By Ed on 24th August 2017

Add your own comment below and let others know what you think:

Radius Around Point KML output now shows each radius as the same colour as displayed on the map.